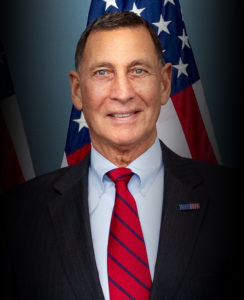 Retired after 24 years serving in the U.S. House of Representatives for New Jersey’s 2nd Congressional district, Frank LoBiondo is the founder and CEO of “LoBo Strategies LLC,” an independent consulting firm providing solutions-driven strategic advice in government and legislative affairs as well as public relations to its clients.

Prior to elected office, Frank was a successful small businessman for more than 26 years at his family-owned and operated trucking company before stepping away upon election to the U.S. House of Representatives. However, with trucking in his blood, Frank maintains his Commercial Driver’s License even today.

Frank is currently a member of the Board of Directors for the Washington D.C.-based Association for Unmanned Vehicle Systems (AUVSI) and the New Jersey-based National Aviation Research & Technology Park. He is an advisory board member for Global PPE and sits on the Conservancy Council for The Nature Conservancy in New Jersey.

Frank grew up in the small farming community of Rosenhayn, New Jersey. He attended Georgetown Prep in Maryland and received his B.A. in Business Administration from St. Joseph’s University in Philadelphia. Frank and his and his wife Tina, a real estate agent, split their time between South Jersey and South Florida with their Weimaraners – Lucia and Lex.